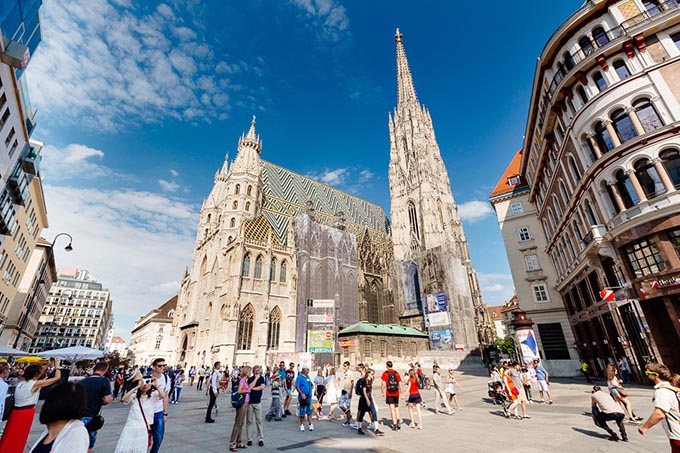 Vienna is the capital of Austria and a home to nearly one third of the county’s population. Vienna is one of those “must see” cities on every travelers agenda, as with its cultural heritage is one of the most refine cities in Europe. Religion is a big aspect to the culture within Austria, and specifically within Vienna. Vienna is ranked among the most-lively cities in Europe and no wonder as its warm and friendly charm, appeals to all types of travelers. So whether you are looking to explore the stunning palaces, museums and historic buildings or enjoy a cup of coffee on some of the most world renowned squares, Vienna presents the perfect opportunity for a wide range of things to do.

This colossal yellow palace is undoubtedly one of the greatest castles of Europe, constructed, renovated and added on by members of the Habsburg line, it eventually achieve the current state in which we can all view it today, during the rain of Austria’s beloved Empress Maria Theresa in the 1700’s. The palace is incredibly large with more than a thousand rooms, wondering around the Schondunn palace is like entering a time capsule from the past. The grounds of the palace are anything but less marvelous from the palace itself, as the spectacular grounds are equally breathtaking and dizzying as the palace itself. The final piece of the puzzle in the Schonbrunn Palace is the roof, which consist of domes and miniatures, to looks as if the entire city of Istanbul was perched on top of it.

A cup of coffee in the streets of Vienna is not your ordinary thing, as the city is widely renowned for its vast array of coffee houses, a cornerstone of the city’s intellectual scenes for centuries. Rather than a convenient stop to feed in for a quick fix espresso, the typical Viennese coffee houses as are known its more suited for lingering over a long period of time. The Baroque and Grand café central are a common destination for tourist looking to enjoy a classical Viennese coffee, however if you’re looking for a more laid-back experience I suggest you try the discreet and subdued Café Landtmann, also a favorite of the father of psychoanalysis Sigmund Freud. A popular order among visitors and a Viennese specialty is the mélange, a cross combination between a latte and a cappuccino and what better way to top it off, than with a Sachetorte, Vienna’s famous chocolate cake.

With Austria being the home of Mozart and Straus, classical music virtually leaches from the streets of Vienna. There are many fine establishments at which to hear recitals from any number of Viennas great classical music ensembles, in fact there is virtually performances at any night of the year. The elegant Neo-Romantic Vienna State Oprah has an enormous 2300 seat concert hall, there are also numerous independently run recital halls for smaller performances such as Quartets. Music in Vienna is a must.

Vienna can be eccentric as well as refined and this attraction certainly tends towards the quickly, it is based renowned Vienna School of Surgeons founded in 1782 and known to the Viennese as the Josephenum. Open to the public is the display of medical malleolus or Anatomical Wax models, apparently the largest in the world, not a sights for the faint hearted, the models are eerily real and in various stages of a vivisection it is however fascinating and perhaps more than any other attraction reflects the cutting edge of intellectualism, so much a part of Vienna’s life.

Microblading near me made this possible with their support.  If you are thinking of getting your eyebrows microbladed so that they are hassle free then come and check them out.